Recently the merging of Fedora Atomic and CoreOS Container Linux into what is now known as Fedora CoreOS has moved out of preview and is ready for prime time use. I’ve been running a few small container apps on a Fedora Atomic 28 VM, which is now ripe to be moved into the new replacement Fedora CoreOS. Here’s how I did this.

I’ll be deploying on a KVM environment, so I downloaded the new QCOW2 image (You can also get an AMI for AWS). The Fedora documentation has instructions on how to migrate from Fedora Atomic Host, so this is what I followed. Essentially we need to move from using cloud-init and cloud-config scripts to ignition which uses a JSON formatted config to provision a Fedora CoreOS system.

First we create a YAML formatted configuration file, which we’ll then convert to JSON with the fcct tool. I only have some basic configuration items I need on my CoreOS system:

Here is what my config file looks like. You can use the FCCT spec docs to add in config for storage, files, disks, etc.

I don’t have the fcct tool local on my Fedora 30 workstation, so I’ll use the podman container to convert the YAML to JSON:

Then, with virt-install, I create a new VM referencing the QCOW2 image, and provide the coreos.ign file in the qemu command line parameter:

At first boot, the VM will use DHCP for its address, but will also have the ignition configuration applied to the host. Reboot the host for the config to be applied:

And we’re done! We now have a container specific OS that will get updates beyond Fedora Atomic & CoreOS Container Linux EOL.

To enable nested virtualization within a Red Hat Virtualization 4.3 environment, you will need to do two things. First, make sure the “vdsm-hook-nestedvt” package is present on the host hypervisor. You’ll need to restart vdsmd as well after installing.

Second, you’ll need to enable the Pass-Through Host CPU option in the virtual machine settings (under the host section). With both of these done, you should get the virtualization extensions passed into the guest OSs on that hypervisor.

Keep in mind nested virtualization is not supported for production workloads.

Every so often I come across an interesting use-case or a really creative way to integrate different technology that I haven’t seen before. I follow a few folks on social media and blogs that do this stuff on a regular basis, one of them being Keith Tenzer. He’s put together a really interesting demo of Ansible Tower connected with GitHub and a webhook that showcases how CI/CD can be accomplished using Ansible without the need for a formal CI/CD pipeline toolset like Jenkins. He sparked an idea for me to put together a similar environment as I think this makes for a great demo and showcase of what Ansible Tower is capable of.

I’ve adapted his work to use Azure instead of OpenStack, but the concepts remain the same. He’s got some detail in his blog about how to setup the environment and connect services together, so I’ll let his work there speak for itself on how to get it setup. The changes I’ve made can be found in a couple of playbooks that provision infrastructure in Azure:

Then I use a webservice called ultrahook.com to bridge the GitHub events to my homelab of Ansible Tower. You may not need this if your Ansible Tower server lives in the cloud. The high level architecture and workflow looks like this: 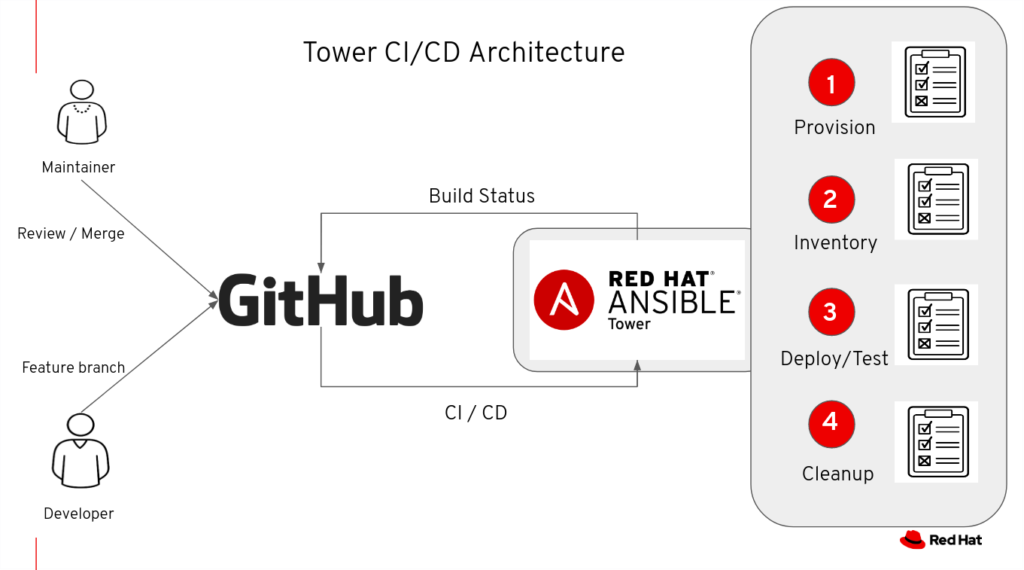 Lastly, I’ve recorded a demo of what this looks like. Similar to Keith, showcasing the developer workflow of checking in code, Tower building infrastructure and running the unit testing, then finally updating GitHub with the result. Then highlighting what a maintainer might see when they’re doing to merge the new code into the project.