Compliance scanning and remediation with Ansible is a common question that comes up. How does Ansible do this? What are its capabilities? Within the Ansible Galaxy community, there’s been some significant investment in developing ansible roles for security and compliance. I’ll show you how to download this Ansible role and make use of it within Ansible Tower.

First off, you can view the available security roles. Here we’ll use the rhel7-role-pci-dss role:

On the Tower host, let’s download and install this role using ansible-galaxy:

Create a playbook that makes use of this role, here’s an example you can use and then modify to your liking:

I’ve created a job template in Ansible Tower to then run this playbook via a github project integration in Tower. A user can then just click launch:

Finally, we see the PCI-DSS compliance role run on the example host, and apply all the remediations contained in the role:

Every so often I try to make an effort to increase the security surrounding the technology I use. Its usually after I read a notable CVE bulletin, or hear of the latest hack. I’ve been wanting a more secure solution to webmail for the longest time, but knew I didn’t have many options if I enjoyed using webmail clients. They’re just so darn convenient. After enabling two-factor authentication on everything I could, I still was looking for a better solution for encrypted email. I like the project mailpile, but they’re not as far along yet in features for my needs. (Consider donating if you value secure email!) I ended up going back to a local mail client (Thunderbird), which I’ve connected to my webmail accounts, and downloaded the Enigmail add-on for OpenPGP encryption and digital signing.

Once I installed the add-on, it was pretty easy to get started. There’s a setup wizard that will either create you a new PGP/GPG2 key, or you can select to use an existing key already: 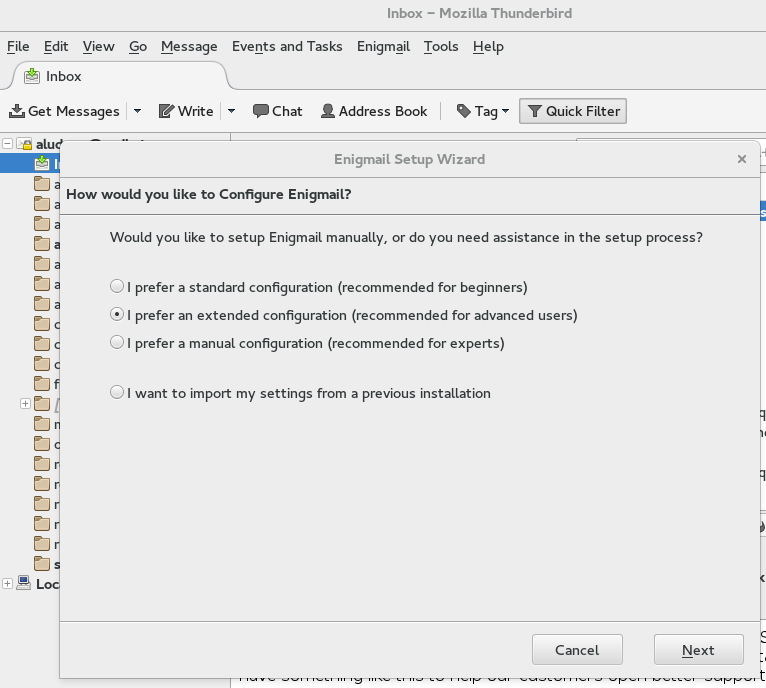 I selected advanced, and picked an existing GPG2 key I have already. It imported it in one step, and I was ready to go. Next, a test email to myself to test enabling a digital signature (I had to manually accept my own key as “trusted” once I received the mail): 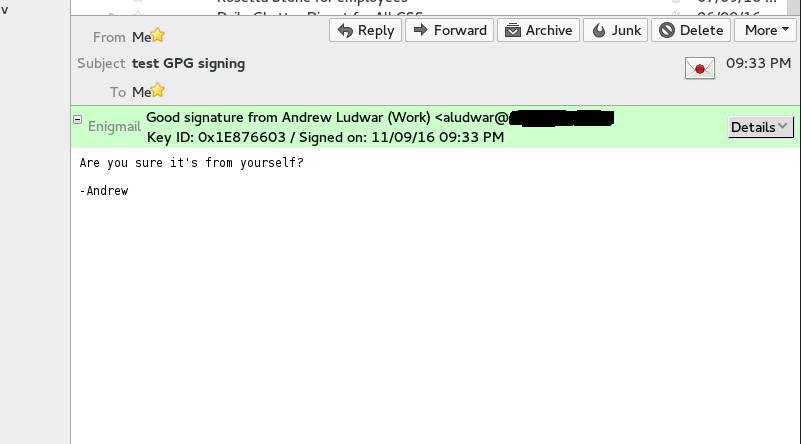 And writing an encrypted mail was just as easy:

The Enigmail plugin makes it easy to add others to your GPG circle of trust, and GPG2 encrypted email is a now click away.

If you have a smartphone, surely you covet it’s presence and usage. It probably doesn’t leave your sight very often, and losing it would be a huge inconvenience to you, perhaps almost disastrous. Thankfully, there’s a slew of services out there that help you locate your lost or stolen device, remote wipe it, etc. in case this happens. I’m going to highlight one more tool available to you in your smartphone arsenal that can help you keep tabs on your device. Also, this tool can be used for quite a bit more than security. Since this is a linux blog, of course I’m going to be talking about the android platform 🙂 .

Tasker is an automation application that’s available for Android. Think of it as an automation language for your smartphone. From settings to states and events, Tasker allows you to setup rules and logic to handle common tasks that you may want to automate, or integrate together. If you’re familiar with IFTTT think of it as IFTTT for your phone. One of the recipes I’ve been meaning to setup for a while (a recipe or profile is the term used to group rules and logic together) is to detect when someone enters my PIN or PATTERN code incorrectly, have a photo of them taken discreetly, and then email it to me with the phone’s GPS location. This gives me a picture of the potential thief, as well as the location of my phone should I ever lose it. This is something I could provide to authorities to help recover the device, or at least see which friend/child has “borrowed” my phone for mischief. 🙂

I have a Samsung Galaxy S4 running CyanogenMod11, which is Android KitKat v 4.4.4. You’ll need to install Tasker, add the Secure Settings plugin to Android, install SL4A (Scripting Layer for Android), install Python, and have this script in your /sdcard/sl4a/scripts/ directory. Tasker has a wiki and further details on how to do this if you have questions. I had some troubles locating these .apk files as the SL4A project has recently moved from Google Code. I’ve linked them here for your convenience, but you could download from a more *trusted* source if you’d rather 🙂 . Once those items are installed from Google Play, you’ll want to open Python and follow the prompts to complete installing the modules. You should end up being able to run SL4A and see a few scripts in it’s list, one of them being sendemailA.py:

From here, you’re ready to open Tasker, and create the profile. The Tasker wiki has pre-built profiles you can either use directly, or slightly modify for your own use. I used both of these profiles to create mine. The first, failed login photo, and the second, automatically take and email your photo. At this point, you’ll be creating your first Tasker profile, associating Actions with it, and creating/setting a few variables. Don’t worry, this is pretty easy to do, you don’t need any programming experience. Here is what my Tasker profile looks like. I’ve removed my personal values in the variables, these will be substituted for your own:

You can hit the play button at the bottom left to test your recipe. This is what my final product looks like… After 3 failed login attempts, I’m emailed a photo of the intruder (me in this case!), with a link to my phone’s GPS location transposed onto Google Maps: